A late goal from substitute Niclas Fuellkrug gave Germany a 1-1 draw with Spain on Sunday, while the four-time winners kept their World Cup hopes alive, but Belgium are in danger of losing the group stage after losing to Morocco.

Keysher Fuller’s 81st-minute strike for Costa Rica at Doha’s Ahmad Bin Ali Stadium in Sunday’s early game eased some of the pressure on the Germans as it prevented Japan from taking a big step towards the last 16 .

Hansi Flick’s Germany side were still in need of their clash with 2010 winners Spain at the Al Bayt Stadium in Al Khor, north of Doha, after losing 2-1 to Japan in their Group E opener.

But they found themselves in deep trouble when substitute Alvaro Morata converted a Jordi Alba cross just after the hour to put Spain ahead.

Germany, who had ruled out an Antonio Rüdiger goal for offside in the first half, had a substitute of their own to thank when Werder Bremen striker Fuellkrug equalized in the 83rd minute in only his third international cap.

“We still have room for improvement, but we can hope that everything will be fine in the final,” the 29-year-old Fuelkrug told ZDF.

His side are still bottom of Group E on a single point, with Japan and Costa Rica on three points each, while Spain top the table on four.

Spain will definitely qualify by a point against Japan, who now need to win this game to give themselves the best possible chance of progressing to the next round.

“Of course Spain will be tough, but we have a good chance of winning,” said Japan coach Hajime Moriyasu.

“We will be well prepared and go into the game with confidence.”

Meanwhile, Belgium are struggling in Group F after a deserved 2-0 defeat by Morocco.

A win for Belgium would have taken them further, but late goals from Romain Saiss and Zakaria Aboukhlal instead secured Morocco’s first world title in 24 years.

Belgium, who finished third in 2018, lacked the spark and were penalized by inspired resistance.

“We don’t play with joy. Maybe it’s the weight on our shoulders,” said coach Roberto Martinez.

“In the last game we have to play to win and act like we have nothing to lose.”

Belgium’s defeat sparked riots in Brussels, where police used water cannon and tear gas after being attacked by football fans.

In Sunday’s other game in the same period, Croatia fell behind against Canada when Bayern Munich’s Alphonso Davies scored after just two minutes. 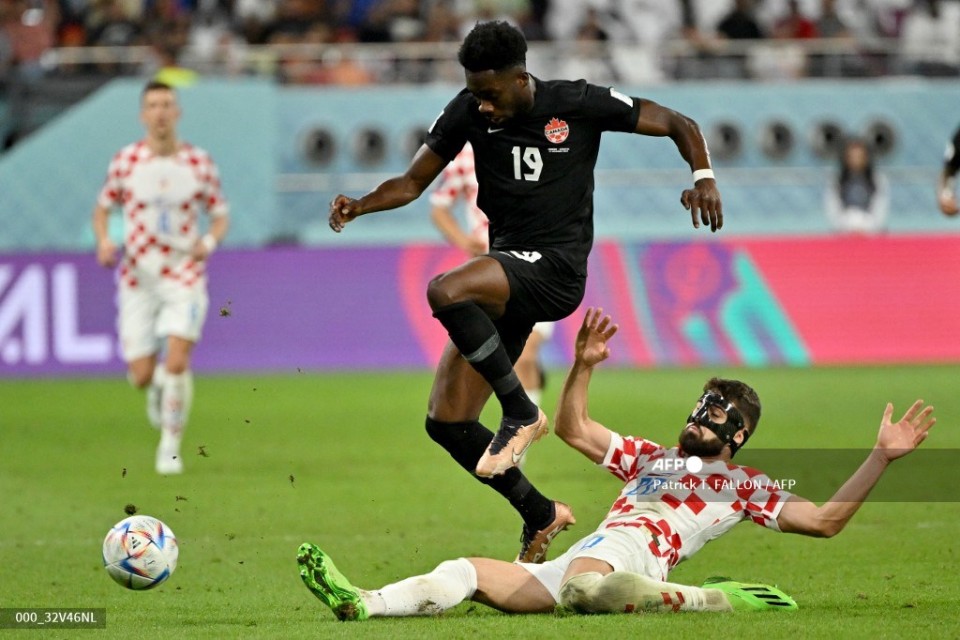 Canada’s No.19 forward Alphonso Davies is challenged by Croatia’s No.20 defender Josko Gvardiol during the Group F World Cup Qatar 2022 football match between Croatia and Canada on November 27, 2022 at the Khalifa International Stadium in Doha. (Photo by Patrick T. FALLON / AFP)

However, the beaten 2018 finalists capitalized on the gaps in Canada’s defense as they roared back to claim a well-deserved win.

Andrej Kramaric scored twice on either side of a lovely Marko Livaja goal before Lovro Majer finished the job in second-half injury time.

Croatia now only need a draw to reach the round of 16 when they meet Belgium in their last group game on Thursday, but the Belgians need a win to progress safely.

The Moroccans will be confident of earning a point for Canada that would take them further.

John Herdman’s side are now stuck and Canada have lost all five games at the World Cup after failing to pick up a point in their last appearance in 1986.

On Monday, Brazil and Portugal each have a chance to enter the last 16 with holders France and play one group game before the end.

Five-time winners Brazil will be without Neymar, who has injured his ankle, when they face Switzerland after Group G rivals Serbia and Cameroon meet in Monday’s early game.

Both Brazil and the Swiss could go through if they win if the other result goes their way.

Cristiano Ronaldo’s Portugal side qualify if they beat Uruguay, while South Korea meet Ghana in the other Group H game.