Dr.-Ing. Notger Heinz is the Principal Data Scientist at Bayes Esports and part of the data science team that ensures Bayes has the best predictions and data services in esports. He writes for Esports Insider to unravel the relationship between the science of statistics and the art of storytelling.

After over a month of action across North America between 24 of the best teams in the world, underdog DRX defied the odds to win the 2022 League of Legends World Championship. But whether or not the 24 competing teams were actually the “best” representatives of their respective regions is up for debate.

Take for example the European league – the League of Legends European Championship (LEC) – where a double elimination KO tournament at the end of the season decides whether or not a team makes it to LoL Esports’ biggest event . Win and you’re in; lose and you’re out.

The better a team performs throughout the season, the easier your competition should be and the more chance you may have of securing your World Cup ticket. Nevertheless, for the majority of teams this means that whether or not they will participate in the Worlds will depend on one or at best two game series.

A bad day can end your season, and a team that has been performing well up to that point can be out. A cruel but exciting format that rewards teams for being good when it really counts, but also one that has the potential to cause big surprises. One that could potentially see an overall “weaker” team make it onto one of esports’ biggest stages.

But how do we even judge which teams are considered “strong” or “weak”?
At Bayes Esports, we have developed an algorithm that can evaluate the strength of a team considering how recent their performance is. The hotter a team is currently and the more recent their wins, the stronger they are judged to be.

By looking at a team’s match history and using Bayesian methods – a technique for statistical reasoning and inspiration for our company’s name – we get a score that is an estimate of the strength of the team, as well as a score that indicates how precisely this is an estimate, or as we call it, an uncertainty.

Since ours is a Bayesian algorithm, this uncertainty determines the speed at which the estimate is updated when new information is available, as well as the basic odds to start with. For example, if a team used to be good but stopped playing for six months, they would have a high score but high uncertainty, so we would rate their chance of winning lower than if they had low uncertainty. We also adjust our rating of the team when new information shows that our previous rating was overly generous.

Essentially, both parts together give a picture of the current situation of a team: how well we assess it and how sure we are. This is what this picture looks like, taken at the end of the LEC Summer Playoffs. 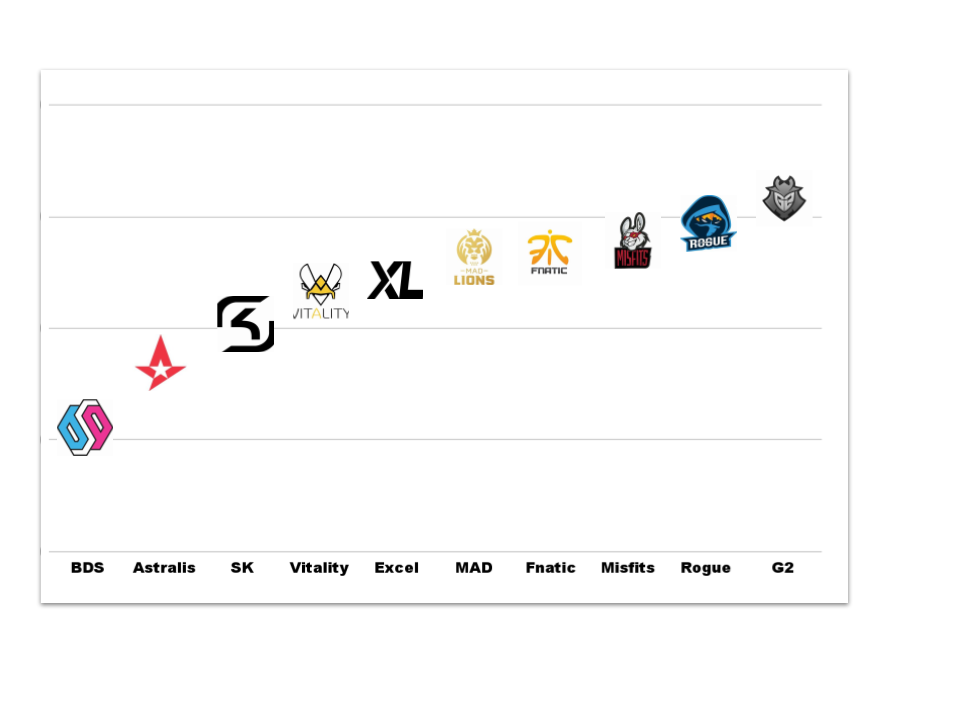 The observant LoL fans have probably already spotted two interesting differences between our calculated ranking and the actual seedings for the European teams at the World Championships. First and foremost, we still have G2 Esports at the top of our list despite losing the LEC Grand Final 3-0 to Rogue. However, that 3-0 loss was offset by G2’s 3-0 win over Rogue in the LEC Playoffs Winners Semifinals, turning their most recent head-to-head to a 3-3.

With Rogue’s poor finish to the season at the top and losing to the bottom three teams – Team BDS, Astralis and SK Gaming – just before the start of the playoffs, we had them ranked even lower before their championship run finally saw them rank second in ours brought perform.

The other difference is the placement of Misfits Gaming in third place and Fnatic in fourth place in our list. This may seem strange considering the poor performance of Misfits in the playoffs, who lost to both G2 and Fnatic to miss out on Worlds qualification. However, while both teams finished the season with 10 wins and 8 losses, Misfits Gaming’s wins were consistent against higher-rated opponents, while Fnatic, on the other hand, almost exclusively won against lower-rated teams, losing key matchups before the playoffs began. This meant that we ranked Misfits in second place before the playoffs and then their performance in the playoffs was very close to Fnatic’s level.

Does that mean the Misfits underperformed badly and that we actually expected them to do better in the playoffs and represent Europe at the Worlds only to fall at the very last hurdle? Somehow, but not really.

What we have are estimates and probabilities. Mean values ​​ranging from 0 to 1, which is what we would expect if the same situation were played out a million times. If we played the playoffs over and over again, we would expect Misfits Gaming to outperform them on average.

However, in the real world, we don’t get an average. We only get one run. Either a team wins or not. 0 or 1 with nothing in between. Losing to underdogs might not have been the most likely outcome based on our calculations, but it wasn’t unlikely either. Anything can happen and that is the true nature of knockout games.

This is also what makes esports so exciting. Even in our purely mathematical evaluations, the strengths of the competing teams in Europe stayed very close together. Any team can beat any other team on any given day. There are no guarantees in esports, so every game is worth watching.

These ratings of strength and probability of victory aren’t set in stone rules about which team will come out on top and how games will end. They are just a glimpse of what to expect as eSports fans. Getting a feel for which team would be considered favorites in a given clash and how far apart we think the strengths of the competing teams are allows us to look at the games being played from a different perspective.

ESI has partnered with META for Esports Revolution in Brussels. To learn more, click here.

They allow experts, whether on-air or in post-game analysis, to tell stories well beyond the thirty to forty minutes of action in the Rift and define favorites and underdogs. They form the basis of which team takes which role in the story told throughout the game. From whom do we expect David and Goliath, or do we expect an unstoppable force to meet an immovable object?

It is these stories that can make every game in sports so emotional and exciting. Stories that are not limited to a specific region or language and are not intended to be told only by an exclusive circle of storytellers.

We have focused here on the teams and results of the LEC, the league closest to our homeland. But through a publicly accessible website and API that allows people to access these types of results themselves, we want to allow others to tell their own stories about LoL Esports.

At Bayes Esports, we are not storytellers. We just provide others with all the tools they need to become one.

From our sponsor Bayes Esports